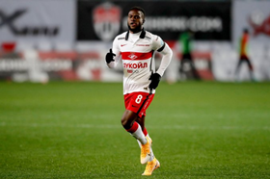 Chelsea loanee Victor Moses has been voted the Most Valuable Player of Spartak Moscow's final match of the season, against Akhmat Grozny, informs the official website of The Red-Whites.
Moses scored the second goal for the Moscovites which helped them secure a draw, finish second in the table and qualify for the third qualifying round of next season's UEFA Champions League.
The 2013 Africa Cup of Nations winner fired home a loose ball in the area to make it 2-2 with eight minutes left on the clock.
Moses claimed 59 percent of the votes cast to finish in first place, with Quincy Promes in second and Jordan Larsson rounding up the top three.
The former Nigeria international scored four times in Spartak Moscow's colours over the course of the season while registering four assists from nineteen games in the top-flight.
Spartak Moscow are likely to exercise their option to purchase Moses from Chelsea for five million euros having qualified for the Champions League.
He has been on the books of Chelsea for nine years, and has taken in loan spells at Liverpool, Stoke City, West Ham, Fenerbahce, Inter Milan and Spartak Moscow.
Igho Kingsley
Photo Credit : spartak.com
Copyright ANS