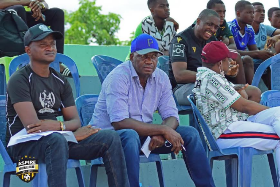 The Principal Officer of Myron Topclass Sport Outfits, Eddie Iseri Ogbemudia has described the just concluded Aspire Football Club scouting programme as top notch, adding that other growing teams across the country will learn a lot from Aspire FC if they seek knowledge.

Eddie Iseri Ogbemudia who was at the Neros stadium, Nanka, Anambra state for the scouting programme alongside ex Super Eagles players, Austin Eguavoen who is the technical director of the Nigeria Football Federation, and Tijani Babangida, the President of the players union said organizers of the event did a good job and noted that he saw some extremely talented players on the pitch during the scouting programme.

The Myron Topclass representative in his words advised the organisers, Aspire FC of Adazi Ani to sustain the quality which it is known for and advised them on the basic needs to make young footballers grow properly.

He said "Obviously, Aspire FC are doing a great job, they have been able to attract top football stakeholders from the country due to the quality they are known for so it's imperative for them to sustain the tenacity".

"It is also very pertinent to continue with proper documentation, proper nutrition, welfare and educate the players on what to eat and what not to consume. It's said that if you expect good eggs from your chicken, you need to give them the best of feed".

Mr Eddie Ogbemudia noted that Myron Topclass Sport Outfits will be available to guide Aspire FC if their services is needed for contract negotiations and documentation.

The President of Aspire FC Dr. Emeka Okeke appreciated all stakeholders who were part of the event and promised that the professionalism which the club is known for will not cease.

Also present at the event was seasoned sports Journalist, Ralph Chidozie George and people from different walks of life.