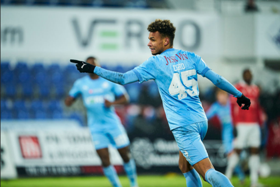 Danish Superliga side Randers have informed through their official website that Austrian-Nigerian center forward Marvin Egho has extended his contract with the club.
Egho, whose current deal was due to expire at the end of this season, is now tied to Randers until June 30, 2024 having put pen to paper on a fresh three-year contract.
Three years ago, Randers FC picked up the former Austria U21 international  from Slovak champions Spartak Trnava.
Egho was impressive as Randers won the Sydbank Pokalen, scoring five goals in seven matches.
On his new deal, the 27-year-old told the club's official website : "I feel really good in Randers FC, where we have a fantastic community, and the team right now is performing really well.
"It was great to win the cup final not so long ago and I enjoy playing football at the club.
"We are facing an exciting season, and I look forward to even more experiences in the league and now also in Europe."
Egho's other clubs as a professional include SR Donaufeld Wien, Rapid Wien, Admira Wacker,  Wiener Neustadt and Reid.
Igho Kingsley
Photo Credit : randersfc.dk
Copyright ANS
All rights reserved. This material, and other digital content on this website, may not be reproduced, published, rewritten or redistributed in whole or in part without prior express written permission from allnigeriasoccer.com