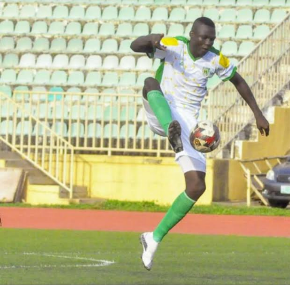 Allnigeriasoccer.com can exclusively report that one of the leading scorers in the Nigerian Professional Football League, Mustapha Ibrahim is attracting huge interest from several European, Asian and North African clubs ahead of the opening of the transfer window.
The Nigeria international has been very consistent for Plateau United since returning to the country from a loan spell at United Arab Emirates club Dibba Al-Hisn , scoring 8 goals in eleven matches.
Belgian First Division A club Beerschot have opened talks with the striker's camp over a deal in the summer.
Ukrainian Premier League team FC Vorskla Poltava have identified Ibrahim as a replacement for their top scorer Vladyslav Kulach, who is attracting interest from his former club Shakhtar Donetsk.
And there is more competition for his services in the form of North Macedonian outfit KF Shkëndija, who faced Tottenham Hotspur in the third qualifying round of this season's Europa League, Zamalek (Egypt) as well as clubs based in Algeria, Morocco and Tunisia.
Malaysian Super League side Kuala Lumpur City have also shown interest in signing the 24-year-old Ibrahim.
The former Enyimba star was a member of the Super Eagles squad to the 2018 African Nations Championship hosted by Morocco.
Ifeanyi Emmanuel
Copyright ANS
All rights reserved. This material, and other digital content on this website, may not be reproduced, published, rewritten or redistributed in whole or in part without prior express written permission from allnigeriasoccer.com
Latest News