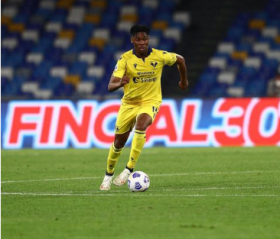 Italian-born Hellas Verona fullback Destiny Udogie will fancy his chances of being a first-team regular at Serie A club Hellas Verona next season, allnigeriasoccer.com reports.
The 18-year-old was in various matchday squads in the recently concluded Serie A campaign, making five appearances as a substitute including last night's 1-1 draw with Napoli at the Diego Maradona Stadium, where he replaced the injured Pawel Dawidowicz four minutes before half-time.
Udogie made his professional debut against AC Milan at the age of seventeen - a testament to how highly he is rated by the Hellas Verona coaching staff.
He made an impact for the youth teams of Hellas Verona before he was brought into the first team fold, netting nine goals in 41 appearances while registering five assists.
Udogie has been described as an extremely talented fullback who is blessed with pace, offers physicality and athletic.
He has already racked up 29 international appearances for Italy U16, U17, U18 and U19 national teams and showed he has an eye for goal despite being a defender with three strikes.
Having impressed in his first steps in the senior game, the Nigeria Football Federation and manager Gernot Rohr could look his way in the not too distant future if he agrees to switch his allegiance from Italy to the Super Eagles.
Ifeanyi Emmanuel
Copyright ANS
All rights reserved. This material, and other digital content on this website, may not be reproduced, published, rewritten or redistributed in whole or in part without prior express written permission from allnigeriasoccer.com