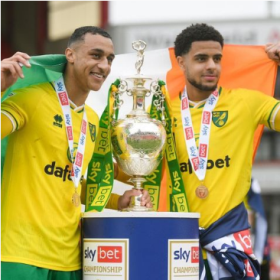 The Football Association of Ireland are aiming to beat Nigeria to the services of Rotherham United winger Chiedozie Ogbene and Norwich City center back Andrew Omobamidele.
Ireland manager Stephen Kenny has named a 27-man squad for the upcoming international friendlies against Andorra and Hungary, with the Irish-Nigerian duo making the cut.
Ogbene and Omobamidele are two of the four new call-ups to the senior squad for the friendlies holding in Barcelona and Budapest on June 3rd and June 8th respectively.
Born in Lagos twenty-four years ago, Ogbene has received a first call-up to The Boys in Green after pledging his international allegiance to Ireland over Nigeria.
In the recently concluded season, he appeared in twelve games for Rotherham United's first team as a knee injury restricted his playing time.
Omobamidele is well known to the Republic of Ireland set-up having represented the U17, U18, U19 and U21 teams in the past.
The 18-year-old made inroads at Premier League new boys Norwich City in 2020-2021, starting the last eight matches played by the Canaries in the Championship.
Manchester City goalkeeper Gavin Bazunu, who is two games away from being cap-tied to Ireland, has made the squad list along with the already cap-tied Norwich City striker Adam Idah.
Igho Kingsley
Photo Credit : instagram.com/a.omobamidele
Copyright ANS
All rights reserved. This material, and other digital content on this website, may not be reproduced, published, rewritten or redistributed in whole or in part without prior express written permission from allnigeriasoccer.com