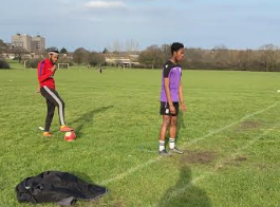 Allnigeriasoccer.com can exclusively report that newly-promoted English Premier League club Watford have won the race for the signature of promising Nigerian central defender Darrin Enahoro.
The Hornets have offered the tall center-back a contract following a successful trial and he is among the new intake of scholars for the 2021-2022 campaign.
Enahoro has made the move to the Vicarage Stadium outfit from Championship club Stoke City.
He had to move on to pastures new after he was informed that he was not going to be offered a scholarship at the Potters for next season.
Enahoro trained with Premier League side Burnley and Championship club Coventry City but the duo missed out on his signature.
The 2004-born player has been described as a ball-playing center back who is composed when in possession of the ball, strong in the tackle and possesses excellent aerial ability.
Next season, Enahoro is eligible to represent Watford in the U18 Professional Development League, FA Youth Cup and Professional Development League.
Ifeanyi Emmanuel
Copyright ANS
All rights reserved. This material, and other digital content on this website, may not be reproduced, published, rewritten or redistributed in whole or in part without prior express written permission from allnigeriasoccer.com