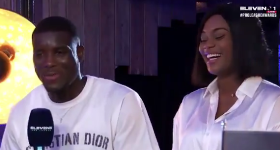 Racing Genk striker Paul Onuachu picked up two awards at the Belgian Pro League awards held in Brussels on Monday evening.
The Nigeria international was named Player of the Year for the 2020-2021 season ahead of Austrian Raphael Holzhauser (Beerschot) and Dutchman Noa Lang (Club Bruges).
With a phenomenal 33 goals in 38 league matches, Onuachu won the Golden Boot prize after scoring a goal each in eighteen games, six braces and one hat-trick.
The FC Ebedei product found the net in 25 different games and averaged a goal every 79 minutes.
He was a key figure as Genk won this season's Belgian Cup and qualified for the third qualifying round of the 2021-2022 Champions League by virtue of finishing second in the final table.
It is all but confirmed that Onuachu will depart Racing Genk in the summer transfer window after an excellent season.
Quizzed by sports television channel Eleven Sports, the 26-year-old reiterated that he is a supporter of Premier League side Arsenal.
"Even you, you have a club you support, everybody has that so I support Arsenal. I like watching them in the Premier League," Onuachu said.
The interviewer suggested that there could be room for him in attack at Arsenal as there is a probability of Alexandre Lacazette and Pierre-Emerick Aubameyang leaving the club in the summer.
He responded : "I don't think so. Right now I am a Genk player and I still remain Genk".
Onuachu, who has been named in the Super Eagles final squad for the friendly against Cameroon next month, joined Racing Genk from Danish side FC Midtjylland in August 2019.
Ifeanyi Emmanuel
Copyright ANS
All rights reserved. This material, and other digital content on this website, may not be reproduced, published, rewritten or redistributed in whole or in part without prior express written permission from allnigeriasoccer.com
Latest News