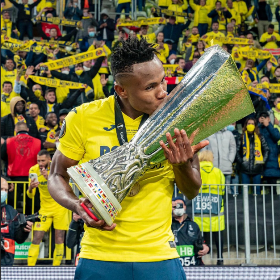 Samuel Chukwueze has reacted to Villarreal's win on penalties against Manchester United in the Europa League final - their first trophy in European competition.
Before the showpiece at the Gdansk Stadium in Poland, several Nigerians were rooting for the Yellow Submarine to beat the Red Devils because of Chukweze but they ended up disappointed after he was left out of the matchday squad.
The right winger failed a fitness test in the last training session ahead of the final, effectively ruling him out of the contest.
Manager Unai Emery's team were handed the Europa League title as United goalkeeper David de Gea missed his spot-kick after all the outfield players and Villarreal glovesman Rulli converted theirs.
Reacting to the win on Thursday afternoon, Chukwueze posted on Instagram : "Only God can do this 🙏❤️ Champions 🤩💛💛💛💛❤️💪🏿💪🏿".
According to the FEDEX Performance Zone player ranking published by UEFA, only four Villarreal players, namely Gerard Moreno (8544 pts), Daniel Parejo (6960 pts), Raúl Albiol (5149 pts) and Alfonso Pedraza (5076 pts) fared better than Chukwueze (4431 pts) in the 2020-2021 Europa League.
The Nigeria international was particularly outstanding in the 2-1 win against Arsenal in the semifinal first leg, making fourteen successful final third passes.
Ifeanyi Emmanuel
Copyright ANS