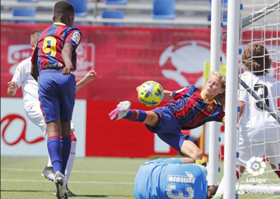 Nigeria-eligible striker David Obinna is living up to his reputation as one of the talented players at La Masia following his outstanding performances for Barcelona at the ongoing LaLiga Promises Santander Tournament.
Nineteen of the twenty clubs that participated in La Liga for the 2020-2021 season in addition to Espanyol, who replaced Athletic Bilbao, are participating in the tournament which is taking place in Villarreal.
Obinna helped Barcelona register four wins - a one hundred percent record - in the first phase on Friday, May 28 by scoring three goals.
The U12 player has been likened to Barcelona first-team wonderkid Ansu Fati due to his pace, dribbling skills, football intelligence and ability to play multiple roles in attack.
The Catalonia side recorded a comfortable 4-0 win in their first match against Osasuna, with Obinna among the scorers.
In a more difficult match against Granada, Obinna spared Barcelona's blushes with the only goal of the game.
He wasn't on target in their third match versus Real Betis and returned to the scoresheet in their resounding 4-1 victory over Alves.
Valencia, Atlético de Madrid, Eibar, Real Sociedad and Huesca competed in Group B, Sevilla, Levante, Espanyol, Eche and Valladolid made up Group C, and Group D comprised Real Madrid, Villarreal, Celta de Vigo, Getafe and Cadiz.
Obinna and his teammates defeated SD Huesca 2-1 in the last sixteen of the LaLiga Promises on Saturday afternoon and will face Atletico Madrid in the quarterfinals this evening.
Born October 26, 2009, he predominantly represents Barcelona's Alevín B squad.
Ifeanyi Emmanuel
Photo Credit : fcbarcelona.com
Copyright ANS