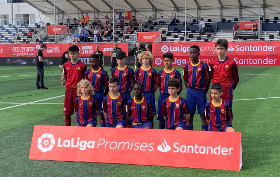 Barcelona have won the thirteenth edition of the LaLiga Promises, thrashing Sevilla 3-0 in the showpiece on Sunday.
Nigeria-eligible striker David Obinna was named in Barcelona's starting lineup in the final against the Andalusian club and gave a good account of himself despite not getting on the scoresheet.
The Catalans scored their three goals in the second half through Raúl Expósito (2) and Ebrima.
To get to the final, the side coached by Jordi Pérez and Pau Moral defeated Osasuna, Granada, Real Betis and then Alavés in the opening phase on Friday, May 28.
The following day, Barcelona beat SD Huesca 2-1 in the round of 16, before a hard-fought 3-2 win on penalties against
Atlético Madrid in the quarterfinals.
The 2009-born Obinna would thank his stars that he scored the decisive penalty against Atlético Madrid because he slipped and fell to the floor as he took the kick but the ball somehow managed to end up in the back of the net.
The Barcelona number 9 was one of the standout players in the opening phase, scoring in all their matches with the exception of the win against Real Betis.
Barcelona have won six of the last nine editions of the LaLiga Promises.
Ifeanyi Emmanuel
Photo Credit : fcbarcelona.com
Copyright ANS