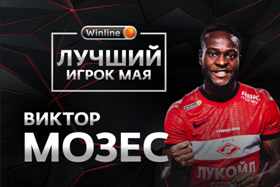 Victor Moses is Spartak Moscow's Player of the Month for May 2021, as voted for by supporters of The Red-Whites, informs the club's official website.
It was a clear decision by the fans, with the former Nigeria international receiving close to half of the votes (49%) cast to place first ahead of Jordan Larsson (25%) and Aleksandr Sobolev (16%).
Other contenders for the Player of the Month accolade were Quincy Promes and Roman Zobnin.
Moses has one year left on his contract with Chelsea but will end a nine-year association with the Champions League winners when the transfer window officially opens for business.
Spartak Moscow have activated the mandatory purchase option for the long-serving Blues right wing-back following their qualification for next season's Champions League.
Moses went the full ninety in all three matches played by Spartak Moscow this month and scored a crucial equaliser versus Akhmat Grozny, while registering two assists against Arsenal Tula.
The 2013 Africa Cup of Nations will play under a new manager, Rui Vitoria at Spartak Moscow next season.
Igho Kingsley
Photo Credit : spartak.com
Copyright ANS