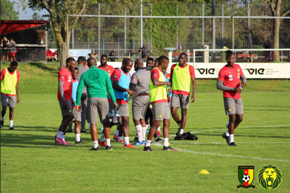 Two more players have pulled out of the Cameroon squad before their friendlies against the Super Eagles.
According to La Cameroon Radio Television, Indomitable Lions manager António Conceição will not be able to count on Shanghai Shenhua striker Christian Bassogog and Philadelphia Union fullback Olivier Mbaizo for the international matches this month.
Bassogog has not been released by Shanghai Shenhua because he would be quarantined upon his return to China after the international break, while Mbaizo has not traveled to Austria due to a visa issue.
Lille midfielder Jean Onana earlier pulled out of the squad as a result of injury and has since been replaced by Royal Excel Mouscron winger Serge Tabekou.
Seventeen invited players participated in the Indomitable Lions first training session on Austrian soil on Monday afternoon, a workout that lasted for approximately two and a half hours.
The five-time African champions will hold two training sessions today, Tuesday - one in the morning and the other in the late afternoon.
Ifeanyi Emmanuel
Photo Credit : fecafoot-officiel.com
Copyright ANS