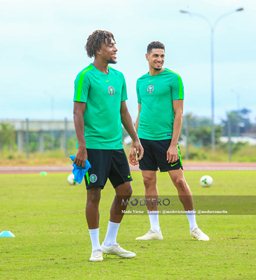 Alex Iwobi is one of the biggest names in the present Super Eagles squad mainly due to the fact that he has been playing in the well-watched English Premier League since 2015.
The former Arsenal winger revealed that many Super Eagles fans come to feast their eyes on the players wherever the national team is based, be it Uyo, Lagos, Asaba or London.
In an interview with Baller Talk via YouTube, premiered May 30, 2021, Iwobi's pal, Femi Ilesanmi recalled that he was invited by manager Gernot Rohr to train with the Super Eagles in London before a cancelled friendly against Burkina Faso in March 2017.
Ilesanmi enjoyed his experience with the Super Eagles - the training, food, culture, post-training activities and African praise songs.
Iwobi added : "It's still a vibe, every time you go there it's like you are linking up with your family, it's so nice like you said there's jollof rice, it's a festival every time.

"As long as we are performing on the pitch it's even better. It's still like a party when you are playing football, they come, they swarm the pitch when we're training.

"Even if it's in London you still see there are so many turning out, like Barnet, people still come to the game so it's like just mad, and playing for your country is always a mad feeling".
Iwobi was involved in Super Eagles first training session in Austria on Tuesday before their upcoming friendlies against Cameroon.
Ifeanyi Emmanuel
Copyright ANS
All rights reserved. This material, and other digital content on this website, may not be reproduced, published, rewritten or redistributed in whole or in part without prior express written permission from allnigeriasoccer.com