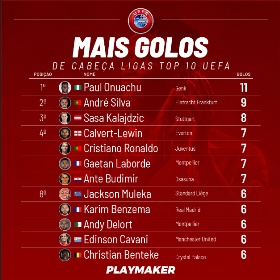 Racing Genk striker Paul Onuachu, who measures 6 ft 6 in, proved his aerial ability over the course of the 2020-2021 campaign by scoring 11 goals through headers, which is not really a surprise considering his height.
According to Playmaker Stats, no player in Europe's ten leagues scored more headed goals that the Nigeria international in the recently concluded season.
Onuachu ranks first ahead of Eintracht Frankfurt's Andre Silva (9) and VfB Stuttgart's Sasa Kalajdzic (8).
There is a four-way tie for the fourth position, with Everton's Dominic Calvert-Lewin, Juventus' Cristiano Ronaldo, Montpellier's Gaetan Laborde and Osasuna's Ante Budimir finishing the season with seven goals each.
Manchester United's Edinson Cavani, Crystal Palace's Christian Benteke, Real Madrid's Karim Benzema, Standard Liege's Jackson Muleka and Montpellier's Andy Delort are joint-eighth, turning in six headers each in 2020-2021.
On the international scene, Onuachu scored a crucial header - a 93rd minute winner - as the Super Eagles defeated the Republic of Benin 1-0 in a 2021 Africa Cup of Nations qualifier in March.
The former FC Midtjylland star is due to link up with the Super Eagles at their training camp in Austria on Wednesday.
Ifeanyi Emmanuel
Copyright ANS
All rights reserved. This material, and other digital content on this website, may not be reproduced, published, rewritten or redistributed in whole or in part without prior express written permission from allnigeriasoccer.com