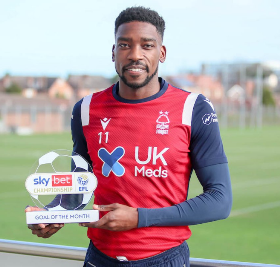 Former Nigeria U20 international Sammy Ameobi is searching for a new club following his release by Championship outfit Nottingham Forest.
Nottingham Forest have published the retained and released list following the conclusion of the 2020-2021 campaign, and confirmed that the contract of Ameobi has expired and he'll be leaving the club.
A product of the Newcastle United Academy, Ameobi joined Nottingham Forest in the summer of 2019 after a spell with Bolton Wanderers.
In two seasons at the City Ground, he mustered eight goals in 81 appearances while producing eleven assists.
On a personal level, the winger won the Championship Goal of the Month award for January 2021 for his second goal in the 3-1 win over Millwall.
Ameobi enjoyed loan spells at Middlesbrough, Cardiff City and Bolton Wanderers during his time with Newcastle United.
His brother, Shola Ameobi, was a member of the Super Eagles squad to the 2014 World Cup.
Igho Kingsley
Photo Credit : nottinghamforest.co.uk
Copyright ANS
All rights reserved. This material, and other digital content on this website, may not be reproduced, published, rewritten or redistributed in whole or in part without prior express written permission from allnigeriasoccer.com