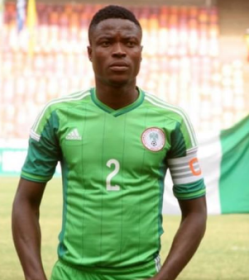 Former Nigeria U23 captain Erhun Obanor is delighted with the progress made by his ex-teammates in the Dream Team VI, William Troost-Ekong, Oghenekaro Etebo and Abdullahi Shehu, who have been promoted to the Super Eagles and started the recent friendly match against Cameroon.
The KF Laci center-back trained with the aforementioned players ahead of the 2016 Olympic Games in Brazil but was omitted from the final roster by manager Samson Siasia largely due to the fact that he reported to camp late because he was concluding a deal with German club SpVgg Greuther Fürth.
Obanor has made himself available for selection for next month's friendly against Mexico in the United States, though manager Gernot Rohr is expected to name several home based players on the Super Eagles roster.
"I couldn't watch the last friendly against Cameroon because I was busy with my marriage preparations," Obanor told allnigeriasoccer.com.

"I was the captain of the U23s then, of course I am happy for the boys Etebo, Troost-Ekong and Shehu that they are successful, and everything is going fine for them.

"My dream is to join them in the Super Eagles , I know one day my chance will come because I know I can play and I deserve to be there.
"I will be available for the friendly against Mexico in the United States if they call me up."
Obanor revealed that friendly matches should be used to assess new players, especially the footballers plying their trade in the domestic championship.
The 25-year-old said that winning should not be the priority in Tuesday evening's friendly between the Super Eagles and Indomitable Lions.
"I am not hoping for something special tomorrow because it is just a friendly game, these kind of games the coach should use it to encourage the home based players for them to be more exposed.

"The foreign based professionals should relax a little bit, my hope tomorrow is for all the players to be injury free," Obanor added.
Obanor has been offered a new one-year deal by KF Laci ahead of the forthcoming season but is keeping his options open as his contract winds down.
Ifeanyi Emmanuel
Copyright ANS