...the complete Nigerian football portal
Subscribe
'It took me 45 minutes to respond' - Lorient star admits being shocked when contacted by Rohr
Published: June 07, 2021 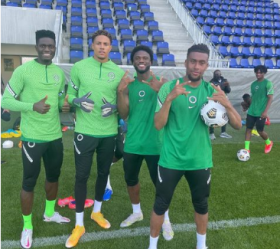 Lorient striker Terem Moffi has admitted that he was pleasantly shocked to be contacted by Nigeria manager Gernot Rohr with a view to a call-up to the Super Eagles after netting his first hat-trick in the French Ligue 1 against Bordeaux in April 2021.
Rohr kept his word by including Moffi in his finalized squad for the two friendlies against Cameroon this month and handed him a debut off the bench in the 1-0 loss to the Indomitable Lions last Friday.
It was only a matter of time before the 22-year-old earned international recognition as he has caught the eye since moving to the French Ligue 1 from the Belgian First Division A last October.
"It was after the Bordeaux game, I scored a hat-trick, my phone was buzzing with messages," Moffi told the Super Eagles Media Team.

"I looked at my WhatsApp and I saw a message from Gernot Rohr, I couldn't reply to the message instantly, I took a screenshot, sent to my family group chat, I was like what do I say because it was really, really, really surprising.

"He's the Super Eagles coach, it's not everybody who has the opportunity to get a message from the coach or a call-up in that way.

"I was really excited and it was really good to be honest."
Moffi admitted that it took him up to forty-five minutes to give Rohr a response and that was after consulting with members of his family.
He continued : "It took me about 45 minutes to give him a response, I thanked him and told him it's an honour to get a message from him and I will really like to play for my nation, said he's looking forward to seeing me, and I said the same here. It was incredible".
On his international debut, Moffi replaced Paul Onuachu in the 66th minute of Friday's loss to Cameroon.
Igho Kingsley
Copyright ANS
All rights reserved. This material, and other digital content on this website, may not be reproduced, published, rewritten or redistributed in whole or in part without prior express written permission from allnigeriasoccer.com