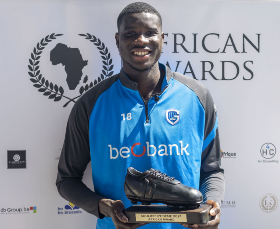 Paul Onuachu has followed in the footsteps of former Super Eagles stars Daniel Amokachi , Victor Ikpeba , Godwin Okpara and Celestine Babayaro by winning the prestigious Ebony Shoe, awarded to the the best football player from Africa or of African origin in Belgium.
The Racing Genk striker beat Anderlecht's Manchester City loanee of Nigerian descent Lukas Nmecha, Racing Genk winger of Congolese descent Théo Bongonda, Anderlecht midfielder of Congolese descent Albert Sambi Lokonga and Club Brugge's Angola right-back Clinton Mata to the accolade.
Onuachu is the fourth Genk player to win the Ebony Shoe after Souleymane Oulare (1999), Moumouni Dagano (2002) and Mbwana Samatta(2019), and succeeds Dieumerci Mbokani.
The jury for the Ebony Shoe, the most important award in the annual African Awards, is made up of all Belgian First Division A and B coaches as well as journalists.
This is the third major individual award won by the FC Ebedei product in 2021, having won the Player of the Year and Golden Boot awards at the Belgian Pro League awards last month.
Onuachu finished the 2020-2021 season with 33 goals in the Belgian First Division A and helped Genk win the Belgian Cup.
Ifeanyi Emmanuel
Photo Credit : krcgenk.be
Copyright ANS
All rights reserved. This material, and other digital content on this website, may not be reproduced, published, rewritten or redistributed in whole or in part without prior express written permission from allnigeriasoccer.com