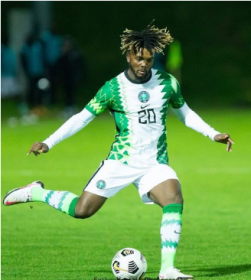 Boavista star Chidozie Awaziem says the atmosphere in the Super Eagles camp is good ahead of Tuesday evening's friendly against Cameroon at Wiener Neustädter Stadion.
Manager Gernot Rohr named four uncapped players in the traveling party to Vienna, namely goalkeeper John Noble, Valentine Ozornwafor, Terem Moffi and Abraham Marcus, before handing late call-ups to Anthony Izuchukwu and Vincent Onovo, who are both hoping to play their first game for the Super Eagles today.
"It has been a wonderful atmosphere, the camp, everyone is happy together, and we are ready for the second game against Cameroon," Awaziem told the Super Eagles Media Team.

"Everyone is prepared, everyone is working hard to make sure we get a victory in the next game".
In the first of the two friendlies against the Indomitable Lions last Friday, Nigeria lost for the first time in twenty one years to the five-time African champions.
On how he felt after the loss, Awaziem said : "It was a good test for us because we have a bigger test ahead of us, so the game was a good test for us but the problem was that we lost the game which we don't like, and which everyone is not happy about.

"We know we had a good game, everyone gave his best to make sure we could get a victory or a draw but at the end we lost.

"I think it was a good test, we could see the ability of everyone and know how to prepare for the World Cup."
There's every indication that Awaziem will be named in the starting lineup against Cameroon and the former Porto man says he is ready to start in the center of defence for the second straight game.
"Definitely I am well prepared, I'm hoping to have a good game as well to help the team get a victory.

"We also want to win the game because it will help our confidence and it will help the team, it will the help the coach also to build his team and all the players are well prepared for the game," the Super Eagles number 20 concluded.
Igho Kingsley
Copyright ANS