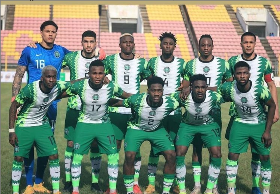 Nigeria manager Gernot Rohr has confirmed his starting lineup for his final preparatory game against African opposition before the start of the 2022 World Cup qualifiers - an international friendly against Cameroon.
Ahead of the game, three players had been guaranteed a spot in the starting lineup by the German football tactician, namely goalkeeper Francis Uzoho, Valentine Ozornwafor and Ahmed Musa, but the APOEL Nicosia star has been left out of the starting lineup - a decision that sees Maduka Okoye keep his place in goal.

Ozornwafor is partnered in defence by Chidozie Awaziem, making his second straight start against the Indomitable Lions, while Abdullahi Shehu and Jamilu Collins are the fullbacks.

The Paderborn left-back had been ruled out of the encounter by coach Rohr but passed a late fitness test ahead of the game.