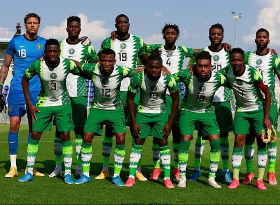 The second leg clash between Nigeria's Super Eagles and the Indomitable Lions of Cameroon in their international friendly games at Stadion Wiener Neustadt ended in an uneventful scoreless draw on Tuesday.

The Eagles head coach Gernot Rohr made a slew of changes to the side that was beaten 1-0 by the same opponents on Friday with Terem Moffi, Abraham Marcus and Valentine Ozornwafor strutting their qualities in the game albeit only the latter started from kick off and finished the game while the duo of Moffi and Marcus came off the bench in the second half.

The Eagles had a few scoring chances that came their way in the second half but Kelechi Iheanacho sliced his shot wide while Terem Moffi was denied by the Cameroonian defence when he received a ball from the Leicester City forward.

The game which was behind closed doors was played in an empty stadium and was perhaps not the best scenario to run the rules on the new boys in the team.

The Eagles will on July 4 face Mexicoin the United States with the home based players hoping fervently to prosecute that encounter as most of the foreign legion will be on vacation or pre-season training.