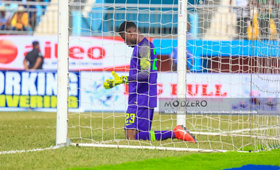 Nigeria manager Gernot Rohr has explained why Francis Uzoho was omitted from the starting lineup for his side's goalless draw against Cameroon on Tuesday evening.
The German football tactician revealed pre-match that three players in the shape of Uzoho, Valentine Ozornwafor and Ahmed Musa were guaranteed spots in the starting lineup, only for the APOEL Nicosia goalkeeper to be excluded and it was down to injury.
Uzoho hinted all was not well at the end of training on Monday, as he didn't believe he had been picked in the starting lineup against the Indomitable Lions.
Anther player in contention to start was Peter Olayinka but the Slavia Prague winger suffered a training ground injury in the team's last workout.
"The special reason is that he (Uzoho) was injured. He came this morning with a painful leg and he told me coach I cannot make it," Rohr told the Super Eagles Media Team post-match.

"Like Olayinka he had to start, yesterday we tried with him, he was injured in the training but it is not a big injury.

"We don't take any risks , I don't want to let the players with injuries go home or go on holidays or return to the club."
Rohr admitted that he was impressed by the display of the players in today's clash and has a tough task on his hand selecting the squad for the World Cup qualifiers as he has a larger pool of players now.
"Everybody did a good job today, we could bring in some new players, we had in defence in the end a winger in the left-back position, the players are really very, very motivated and what we can say now is that I don't have only 30 players I have 45 now because from the first list I made 16 couldn't make it.

"We found 12 other players to come in in the last moment by car, from Hungary, from Slovakia, so we had some boys who are really proud to be with us and we can be grateful that they could give us at least 17 players for the camp, for the field to play our two goalkeepers".
Up next, Nigeria will take on Mexico in a friendly to be staged in the United States next month, before facing Liberia and Cape Verde in their first competitive games of the 2021-2022 season.
Ifeanyi Emmanuel
Copyright ANS