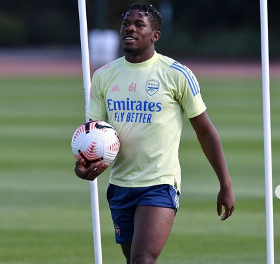 English Premier League club Arsenal are planning to loan out two players of Nigerian descent before the close of the summer transfer window, according to reports in the English press.
Arsenal youth team expert Jeorge Bird has reported that Nigerian-born midfielder Tim Akinola and Ryan Alebiosu are amongst the eight youngsters set to head out on a temporary transfer.
Akinola joined Arsenal from Huddersfield Town in August 2020 without undergoing trials and was a key player of the U23 side in his maiden season at the north London club.
With the exception of the 2-2 draw with West Brom on the final day of the Premier League 2 season, Akinola was an ever-present in Arsenal U21s and U23s matchday squads for 2020-2021.
The 20-year-old appeared in 26 matches in all competitions, logging 1,906 minutes in total.
Right-back Alebiosu played 21 games in all competitions last term, including 18 in the Premier League 2.
Last summer, the 19-year-old signed his first professional contract, a two-year deal, with Arsenal holding an option to extend by a further two years.
The two Anglo-Nigerian prospects trained with Arsenal's first team on multiple occasions last season but are yet to make their professional debuts.
Ifeanyi Emmanuel
Copyright ANS