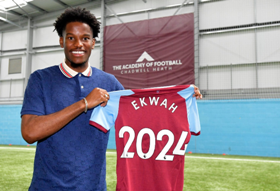 With a statement on their official website, West Ham United have confirmed the signing of promising midfielder Pierre Ekwah Elimby from Chelsea for an undisclosed fee.
The former France U16 international has signed a three-year contract with the Hammers, with the option to extend for a further year.
Ekwah was offered a deal having impressed in trial matches against Arsenal in the Premier League 2 Division One.
The Paris-born starlet made 30 outings for Chelsea in the U18 Premier League and Premier League 2 during his time at Stamford Bridge, scoring five goals.
"I feel really good signing for West Ham. I’m really happy in myself. I want to thank the Club for the opportunity they have given me. It’s a big achievement for me,"  Ekwah told West Ham TV.

"I really think that West Ham is a Club where everyone is working all together. The U23s and the first team work really closely to each other, and I think that young players here have got a good chance of breaking into the first team, as they have done in the past. "
Ekwah's previous clubs include RC Arpajonnais, Brétigny FCS,, CFF Paris and FC Nantes.
Igho Kingsley
Photo Credit : whufc.com