...the complete Nigerian football portal
Subscribe
Rotherham's Ogbene reacts to being the first African-born player to debut for Republic of Ireland
Published: June 10, 2021 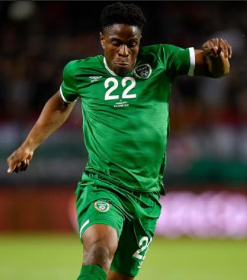 Rotherham United winger Chiedozie Ogbene has spoken of his happiness at being the first African-born player to debut for the Republic of Ireland national team.
Ogbene entered into the history books when he came off the bench to replace Jason Knight in the 89th minute as Ireland were held to a goalless draw by Hungary in an international friendly on Tuesday, June 8.
Born in Lagos, Nigeria's commercial capital, twenty-four years ago, he qualified to represent Ireland as he had lived in the country for more than three years having moved to the European nation at the age of eight.
Ogbene received a maiden call-up from the Football Association of Ireland nine months after he approached manager Stephen Kenny to declare his wish to play for the Boys in Green.
Speaking after his debut, Ogbene was quoted as saying by Irish Examiner : "It's truly a blessing. Most importantly, being from the League of Ireland and coming from that tough structure of football, just to showcase if you believe and never give up, what can happen.

"To be titled the first African-born, I'm really blessed and it's a huge honour, something that I want to inspire everyone else to, to follow their dreams."
Cap-tied duo Norwich City striker Adam Idah and Manchester City goalkeeper Gavin Bazunu were the other players of Nigerian descent in action against Hungary, while teenage central defender Andrew Omobamidele watched proceedings from the bench.
Ifeanyi Emmanuel
Photo Credit : fai.ie