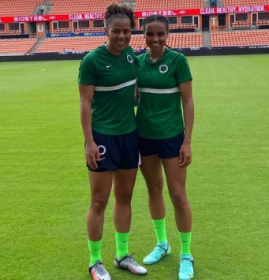 The Nigeria Football Federation have handed surprise call-ups to two highly-rated dual-eligible players ahead of the Super Falcons' international friendly against Jamaica at BBVA Stadium (Houston, Texas).
Tikkurilan Palloseuraa's Finnish-born attacker Roosa Ariyo and FC Zurich's Swiss-born defender Onyinyechi Zogg were involved in Nigeria's workout on Wednesday (see photo) before tonight's friendly with the Reggae Girlz.
Though the invitation came late, it was well deserved as the two players impressed in the 2020-2021 season, with Zogg starring in the UEFA Women's Champions League and Ariyo scoring nine goals in nine matches in the Finnish Kansallinen Liiga, which makes her the second highest goalscorer in the division.
The two players were on the radar of Super Falcons' American manager Randy Waldrum but had been omitted from the finalized 25-player roster announced two weeks ago.
The 26-year-old Ariyo qualifies to represent the African champions through her father and has not yet been approached by the Finnish Federation to play for The Boreal Owls.
Zogg, 24, has been with FC Zurich since 2019 after previous stints at BSC Young Boys, Monroe College, Femina Kickers Worb and FC Bethlehem.
Nigeria will also battle Portugal (June 13) and United States (June 17) during the 2021 Summer Series.
Ifeanyi Emmanuel
Copyright ANS