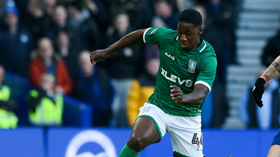 Former England midfielder Carlton Palmer has taken aim at Sheffield Wednesday over their transfer policy, saying he is disappointed about the situation of Osaze Urhoghide.
Ex-Nigeria U23 invitee Urhoghide has turned down a proposed new contract put on the table, paving the way for the central defender to leave the club as a free agent this summer.
A possible reason for the 20-year-old deciding against putting pen to paper could be the reported interest from Crystal Palace, Leeds United and Watford.
Club Brugge and Sporting Lisbon are also interested in acquiring the services of Urhoghide, who trained with the Dream Team before an U23 AFCON qualifier against Libya in 2019.
Speaking to Football League World on Urhoghide, Palmer said : "You’re talking about a young player with a bright future, who now looks set to leave the club, I mean, how many times is this going to happen to Sheffield Wednesday?

"He can potentially leave for virtually nothing, so it’s hugely disappointing that he’s turned down the contract. It’s alright moving to another football club if you’re going to get a bigger salary.

"He’s going to have clubs that will be interested in him and I just hope he moves to play.

"You know, because he’s not played a lot of football and you only get experience and learn by playing regularly. "
Last season, Urhoghide, who joined Sheffield Wednesday from AFC Wimbledon in 2019, recorded 13 starts in all competitions, including 12 in the Championship.
Igho Kingsley
Photo Credit : swfc.co.uk
Copyright ANS