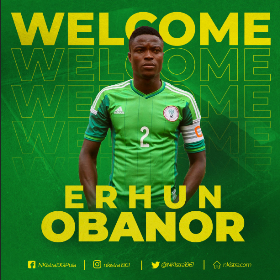 Former Nigeria U23 captain Erhun Obanor has ended speculation about his future by joining Croatian top-flight club NK Istra 1961 on a free transfer.
NK Istra 1961 have announced through their Facebook page that Obanor is a new player of the club without disclosing the financial terms and duration of the deal.
Allnigeriasoccer.com can exclusively report that the ex-Dream Team VI star has signed a two-year contract with NK Istra 1961, until the end of the 2022-2023 season.
Obanor's past club KF Laci were keen to retain his services for the forthcoming season but the central defender opted to move on to pastures new.
The 25-year-old is presently in Benin City and is planning to link up with his new club at the end of the month as he has to apply for a visa.
Obanor had attracted interest from clubs in Azerbaijan and South Africa before settling for NK Istra 1961.
He is the second Nigerian played signed by NK Istra 1961 this week, after onetime Golden Eaglets invitee Theophilus Solomon, who joins from Kuwaiti side Qadsia SC.
Ifeanyi Emmanuel
Copyright ANS