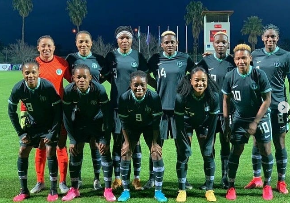 The poor results in June's international friendly games for Nigeria continued on Thursday night and into the wee hours of Friday as the Super Falcons were defeated 1-0 by Jamaica.

Izuchukwu Okosi presents the three takeaways from the game ahead of Sunday's clash against Portugal.


1. Poor Defence
The Nigerian attack was okay on the night but the midfield and ultimately the defence line were the bigger culprits for all things that Jamaica produced.

The only goal of the game would not have come if the defence had closed down the assist maker and the incredibly free Deneisha Blackwood.

The youthful Nigerian team has been prosecuting their games since the end of the 2019 Women's World Cup without experienced striker Desire Oparanozie over her face off with the Nigeria Football Federation.

As soon as whatever was the reason for the problem is resolved, the better for the team. The team needs a blend of experience and youth.

Still in the theme of experienced players missing in action, the team were without Barcelona's Asisat Oshoala.

It might have a different outcome had Oshoala played in the game. End of story. She is that important to a team facing a few challenges.