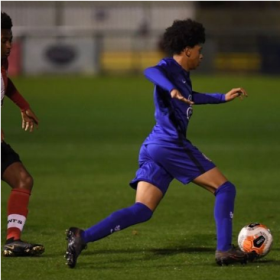 Chelsea are usually one of the first Premier League clubs to announce their new intake of academy scholars each season.
Allnigeriasoccer.com can exclusively report that as from the 2021-2022 campaign, Nigeria-eligible youngster Richard Olise will be eligible to represent the European champions in the English top-flight as he has agreed a scholarship deal with the club which will be activated on July 1, 2021.
Richard Olise's scholarship deal will be automatically upgraded to a professional contract when he turns seventeen years old - a testament to Chelsea's belief in his potential.
Indeed, the promising right wing-back was handed his U18 Premier League debut whist still a schoolboy, playing for 54 minutes in a 3-2 loss to Brighton & Hove in March 2021.
Last season, Richard Olise represented Chelsea in the inaugural U17 Premier League Cup.
Richard is the younger brother of Reading playmaker Michael Olise, who has been approached to play for the Super Eagles and was placed on standby for the national team's AFCON qualifiers in March.
The younger Olise has been capped at youth level by England.
Ifeanyi Emmanuel
Photo Credit : instagram.com/r.olise
Copyright ANS