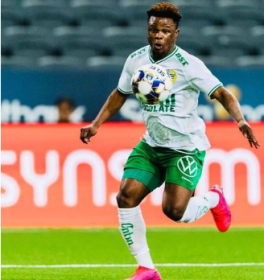 Former Golden Eaglets sensation Akinkunmi Amoo is now rated as Hammarby's most valuable player after only 21 games as a professional footballer.
According to the latest market value updates by Transfermarkt, the Sidos FC product is the most expensive player in Hammarby's ranks with a price tag of three million euros (around N1.8 billion in Nigerian currency).
In terms of Swedish Allsvenskan players, he is the fourth most valuable player and when it comes to Nigerian players he is 32nd.
Amoo is having a productive season at Hammarby, with a goal involvement of eight (7 goals, 1 assist) in fifteen matches despite predominantly playing as a winger.
The 19-year-old, signed for a fee in the region of 200,000 euros, has seen his market value increase with so many European clubs interested in his services.
Allnigeriasoccer.com understands that Leicester City are keeping tabs on Amoo, while Club Brugge and Borussia Dortmund are among his suitors in Belgium and Germany respectively.
Sidos FC will benefit from the future sale of Amoo having inserted a sell-on clause into the deal taking him to Hammarby last summer.
Amoo is now looked after by respected Swedish agent Patrick Mork.
Ifeanyi Emmanuel
Copyright ANS