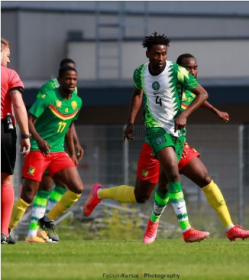 Football.London is urging Premier League side Chelsea to consider a move for Leicester City holding midfielder Wilfred Ndidi in the event they fail to land one of their primary summer transfer targets Declan Rice.
A strong tacker and good interceptor, Rice is considered one of the best defensive midfielders in the English top-flight at the moment.
He joined the Hammers at the age of fourteen after he was released by Chelsea as a schoolboy, rising through the ranks before establishing himself as a first-team regular.
Rice's high valuation, thought to be at least £80 million, might be too expensive for the Blues and hence they could turn their attention to cheaper alternatives.
Football. London has identified three candidates who are more affordable Chelsea should target, with Ndidi, Brighton & Hove's Yves Bissouma and Juventus ace Rodrigo Bentancur on the list.
Ndidi's statistics could convince Chelsea, averaging 4.34 tackles and 2.46 blocks per game, better than Kante and Rice in the two performance indicators.
The Nigeria international's incredible form for Leicester City since his arrival from Racing Genk has seen him linked with possible moves to top Premier League teams each transfer window but he is important to the Foxes and they may be unwilling to sell him.
Igho Kingsley
Copyright ANS