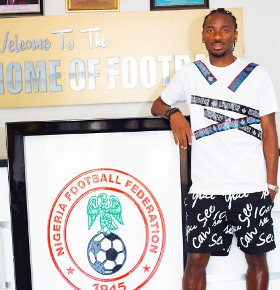 The Nigeria Football Federation have confirmed via Instagram that former Arsenal midfielder Kelechi Nwakali visited their office in Abuja sometime last week.
The Nigerian Federation have chosen not to go into details about their meeting with the SD Huesca player, simply posting, 'Thanks for the visit @nwakali25 and goodluck'.
Having said that, Kelechi was embroiled in a controversy last month after his elder brother Allwell Nwakali stated that agents had approached the midfielder to play for their countries and he was studying the proposals.
Whether it is possible for the younger Nwakali to switch his allegiance from Nigeria to another country is another matter given that he did not hold the nationality of another nation as of the time when he made his competitive debut for Nigeria's U17 team.
Kelechi Nwakali later released a statement that he never considered playing for another country.
Unlike his good friends Victor Osimhen and Samuel Chukwueze, Nwakali has yet to make his senior debut for the Super Eagles with his two appearances coming in unofficial matches against Atlético de Madrid and Liberia.
The 23-year-old caught the eye whilst on loan at AD Alcorcón in the second half of the season, helping Los Alfareros avoid relegation with 4 goals in 18 matches.
Ifeanyi Emmanuel
Copyright ANS