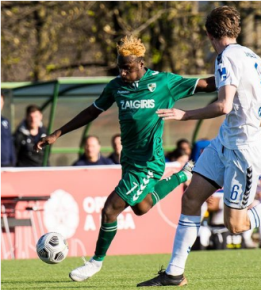 Former Teesside University winger Philip Otele is attracting interest from clubs in Belgium, Switzerland and Denmark in the summer transfer window, allnigeriasoccer.com can exclusively report.
The 22-year-old has taken the Lithuanian A Lyga by storm this season, scoring seven goals while producing two assists in fifteen matches for Kauno Zalgiris.
Otele was on target against Norwegian club Bodø/Glimt in the first qualifying round of last season's Europa League.
FC Zurich, FC St. Gallen, KV Mechelen, K.V. Kortrijk and Randers are exploring ways to sign the talented winger and he is most likely going to join one of these clubs unless a last minute interest pops up.
As things stand, Belgian clubs KV Mechelen and K.V. Kortrijk are leading the race in the scramble for his signature.
Predominantly a right winger, he is also capable of playing as a left winger and center forward.
Otele's goals have helped fire Kauno Zalgiris to the top of the A Lyga table after sixteen matches played.
Ifeanyi Emmanuel
Copyright ANS