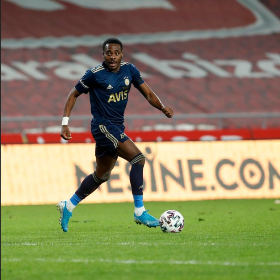 In an interview with Football Insider, Sunderland legend Kevin Phillips wants Scottish Premiership champions Glasgow Rangers to sign Fenerbahce's Bright Osayi-Samuel this summer.
The Nigerian-born winger has been heavily linked with a switch to the Light Blues after they missed out on his services prior to his move to the Yellow Canaries in January 2021.
Phillips, the only Englishman to win the European Golden Shoe, has underlined that Osayi-Samuel can prove a handful for defenders in the Premiership.
The former Queens Park Rangers dazzler lost prominence in the Fenerbahce starting lineup towards the end of the 2020-2021 season, starting only one of their last eight matches in the Turkish Super Lig, leading to speculation surrounding his future five months into his four-and-a-half-year deal with the Istanbul club.
"Yeah, he would do well at Rangers," Phillips told Football Insider correspondent Dylan Childs.

"That’s not big money either. I don’t think he would command massive wages so that could be good business.

"Stevie is always looking to strengthen that squad. It’s going to be a tough season and they need to go again.

"If they can add another player of quality to that side it would be a good move.

"In that league, if you get someone like that running at defenders, he can cause major problems."
Super Eagles duo Leon Balogun and Joe Aribo played for Rangers' first team last season, former Flying Eagles midfielder Nnamdi Ofoborh will link up with the club upon the expiry of his contract at Bournemouth, while ex-Golden Eaglets invitee represents their youth team.
Igho Kingsley
Photo Credit : fenerbahce.org
Copyright ANS