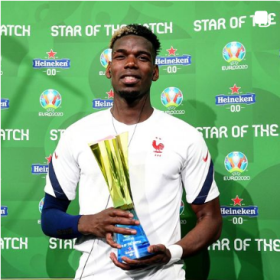 France have begun their Euro 2020 campaign on a winning note albeit with a bit of luck after Germany's Mats Hummels conceded an own goal in their Group F opener on Tuesday in Munich to end the contest 1-0.

The group is widely considered as the toughest of all the six groups heading to the tournament and aptly called the 'group of death'.

Les Blues are beginning to live up to the pre-tournament hype after a hard-fought 1-0 win over Germany.

Taking a look at the latest Euro 2020 odds, France are +390 favorites to win and it is to not surprising to see as they have an incredible team.

European champions Portugal may have started like a house on fire with a convincing 3-0 win over a hitherto difficult side in Hungary but the smart money should still be on France to at least reach the final of the tournament.

The French team have players who have a lot to prove, their reputations are at stake and the Euros presents such opportunities.

Karim Benzema who was overlooked coach Didier Deschamps for their 2018 World Cup triumph have been recalled to the team after his wonderful performances for La Liga side Real Madrid in the 2020/2021 season.

N'golo Kante was instrumental in Chelsea's strong finish to the Champions League success and there are already expectations that should he have a similar output on the team's infield performances and results, then he is a candidate for the FIFA World Player of the Year award prize.

Star of the game against Germany, Paul Pogba, insists that there is sense of purpose in the team despite the return after a long absence of some of the players.

"We did a good job against Germany and this is going to be important in the matches ahead. The  attacking power we have, we know the quality and that we can cause problems to any team, " he told reporters.

On the return of Benzema and Adrien Rabiot to the team after missing the 2018 World Cup Pogba said thus:

"We're together, despite the fact that they didn't part in the World Cup. But they have proved themselves, showed their qualities on and off the pitch, and this is very good for us," the Manchester United midfielder t

Speaking further Pogba spoke about the need for the creative and attack minded players to work in tandem with the defenders in the Championship.

"But we know of course as well that attackers have to defend as well, help the team move and position themselves into spaces where we're not used to seeing them."

The odds are in favour of France who are sure candidates to reach the semifinals of the Championship and possibly the final. This is where the form of the day counts and not pre tournament predictions.

The French side can only stop themselves and hopefully nip in the bud the reported bust-up between Kylian Mbappe and Olivier Giroud in the team camp.