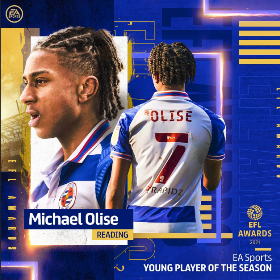 LeicestershireLive is urging Leicester City to make a move for Reading playmaker Michael Olise, who was named on the Super Eagles standby list for their final Africa Cup of Nations qualifiers back in March.
There is speculation surrounding the future of one of the Foxes standout players in recent seasons, James Maddison, with Arsenal pursuing the signature of the former Aberdeen star.
Jordan Blackwell has identified three candidates that would be able to fill the void of Maddison should he depart the King Power Stadium in the summer transfer window.
Olise is one of the candidates and the two others are Eintracht Frankfurt's Daichi Kamada and RB Leipzig's Christopher Nkunku.
The former Chelsea schoolboy has been linked with almost all the top teams in the Premier League following a breakout season at Reading, scoring 7 goals and registering 12 assists in 44 league matches.
Olise was named Young Player of the Year and earned a spot in the Championship Team of the Year for 2020-2021.
Arsenal are in the market for a creative midfielder to replace Martin Odegaard who is heading back to parent club Real Madrid after a successful loan spell in the second half of last season.
Igho Kingsley
Copyright ANS