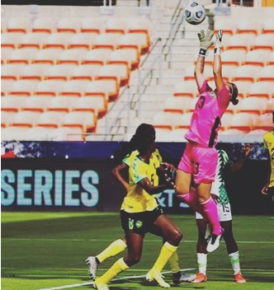 Tottenham Hotspur goalkeeper Becky Spencer was delighted at making her senior debut against African champions Super Falcons.
Born in north-west London, Spencer represented England at U15, U19 and U20 levels before switching allegiance to Jamaica, where her father originally hails from.
The former Arsenal goalkeeper, who was in the England side that forced Nigeria to a 1-1 draw at the 2010 FIFA U20 Women's World Cup, kept a clean sheet in her first appearance for Jamaica eight days ago.
Becky couldn't hide her delight after the game, pointing out that the Super Falcons are thirteen places higher than the Reggae Girlz in the FIFA national team rankings.
"It was nice to face different opposition as well, I mean the last time I played against Nigeria was in an under-20’s World Cup and things have moved on a bit now, we’re all grown adults," Spencer told Tottenham's official website.
"Nigeria are several places above Jamaica in the rankings, so it was a great feeling to get a win against them. It meant a lot to start the tournament on such a high."
The Super Falcons put up a spirited performance in their final game of the 2021 WNT Summer Series but lost to world champions United States on Thursday.
Igho Kingsley
Photo Credit : instagram.com/beckyspencer91
Copyright ANS