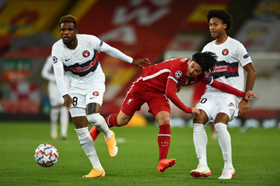 Everything is pointing to the fact that young Nigerian defensive midfielder Raphael Onyedika is being lined up to replace Super Eagles star Frank Onyeka at Danish side FC Midtjylland and this could happen sooner rather than later, allnigeriasoccer.com reports.
Onyeka has been heavily linked with a switch to English Premier League newcomers Brentford this summer and it would be surprising if The Bees don't strike a deal with FC Midtjylland considering the relationship between the two clubs.
The Wolves have officially announced that Onyedika has been promoted to their first team ahead of the new season.
A product of the FC Midtjylland academy, the 20-year-old caught the eye whilst on loan at First Division club FC Fredericia last season, scoring three goals in 28 matches - all of which he started.
Onyedika first came to limelight two seasons ago in the UEFA Youth League, starring as FC Midtjylland reached the quarterfinals of the competition, where they were beaten by an Ajax Amsterdam side containing Joel Ideho.
The Nigerian will train regularly with Midtjylland  first team and be part of Bo Henriksen's squad.
Ifeanyi Emmanuel
Photo Credit : fcm.dk
Copyright ANS