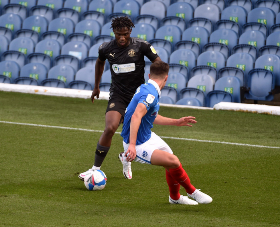 Allnigeriasoccer.com can exclusively report that three EFL League One clubs are monitoring the situation of former Super Eagles invitee Viv Solomon-Otabor.
The Birmingham City academy product is approaching the end of his current deal with Wigan Athletic and was one of the players retained for next season, with the Latics offering him a new deal.
Solomon-Otabor is holding off putting pen to paper on the new deal tabled by Wigan Athletic because he wants improved terms.
The exciting winger is definitely on the list of transfer targets for Sunderland, Portsmouth and Charlton Athletic in the summer transfer window.
Solomon-Otabor has been a long-term target of Portsmouth who attempted to sign him two years ago without success before he sealed a permanent transfer to CSKA Sofia.
The 25-year-old recorded seven appearances for Portsmouth, scoring one goal, during a loan spell in 2019.
Championship clubs Blackpool and Blackburn Rovers are mulling over whether or not to make an offer to Solomon-Otabor.
London-born Solomon-Otabor has trained with Nigeria's Olympic team and Super Eagles in the past.
Ifeanyi Emmanuel
Copyright ANS