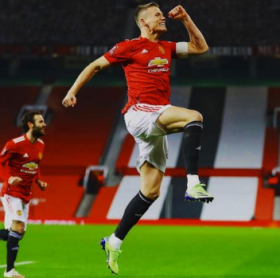 Scotland international Scott McTominay is the latest Manchester United player to entertain questions from fans across the globe.
Manchester United is one of the most supported Premier League teams in Nigeria, along with Chelsea and Arsenal, and most of the matches involving the Red Devils witness huge crowds of supporters in viewing centers.
The central midfielder replied to questions from two supporters based in Nigeria - Sharon-Hephzibah M and Akan U.
Sharon noted that Sir Alex Ferguson compared him with Darren Fletcher and wanted to know how the Manchester United legend, a Champions League winner with the club in 2008, has helped him improve his game.
In the question and answer session published by Manchester United's official website, McTominay replied : "Sharon, Darren has been absolutely amazing whenever he’s come in, he’s been a breath of fresh air.
"All the lads have really taken to him. He was a proper player and is a proper football man. Michael Carrick, the manager, Mike Phelan, are all men who know the game inside out with vast experience of many different leagues.
"For myself, it’s brilliant that I’ve got some of the best guys I could possibly wish for to help me with my game.
"I have to soak it in and maybe one day, be in a position like that and can say I was learning from them and the cycle continues".
Odion Ighalo is the first Nigerian-born player to represent Manchester United in an official match, while Lagos-born winger Tosin Kehinde used to train with the first team before moving on to pastures new in 2018.
Ifeanyi Emmanuel
Photo Credit : manutd.com
Copyright ANS