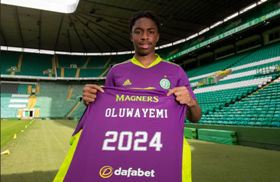 With a statement on their official website, Scottish Premiership giants Glasgow Celtic have announced that promising Nigerian goalkeeper Tobi Oluwayemi has inked a new contract with the club.
The new agreement will keep the 18-year-old at The Hoops until at least the summer of 2024.
Tobi Oluwayemi has been on the books of Celtic since 2019 following his transfer from the academy team of Tottenham Hotspur.
Tobi comes from a family of goalkeepers; his father Abiodun Ogunyemi was a goalkeeper for Ogun State University while his sibling, Joshua was third choice goalkeeper at Tottenham Hotspur towards the end of last season.
In his first words after putting pen to paper, Tobi said : "I played well last season and that led the club to offer me a new deal. The pathway and vision seemed right for me so I’m really happy.

"I’d love to eventually break into the first-team squad and be competing and playing at the highest level I possibly can.
"All you can ask for as a chance and seeing Conor Hazard getting chances to play is great. I’m younger than him so I’ll push and try to get a chance in the future as well."
Tobi Ouwayemi will represent Celtic B team in the Lowland League this coming season.
Ifeanyi Emmanuel
Photo Credit : celticfc.com
Copyright ANS