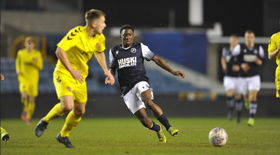 Former Scotland manager Alex McLeish has highlighted the benefit of Glasgow Rangers winning the race for Nigeria-eligible striker Abdul Abdulmalik, the cousin of Chelsea winger Faustino Anjorin.
Abdulmalik is holding off putting pen to paper on a new contract with Millwall amid interest from Arsenal, Glasgow Rangers and Swansea City.
McLeish has praised Rangers' scouting network for identifying the promising teenager, adding that the Light Blues could make a healthy profit if he sold in the future.
Millwall would be due compensation from any club Abdulmalik would join this summer as he is under the age of 24.
"The boys that have grown up in your academy, you don’t see too many of them," McLeish said to Ibrox News.

"The network of scouts, they must know there are special youngsters out there, and that’s a possibility with this Millwall kid.

"It could be a great coup, we have seen over the past few years some young players moving and moving for big money."
In recent years, Rangers have signed Nigeria-eligible youngsters Calvin Bassey, Nnamdi Ofoborh, Malcolm Ebiowei and Joe Aribo.
Igho Kingsley
Photo Credit : millwallfc.co.uk
Copyright ANS