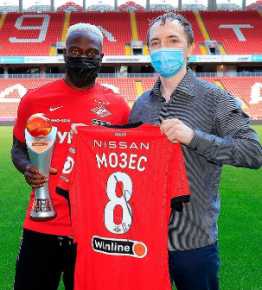 Chelsea loanee Victor Moses was delighted to play a starring role for Spartak Moscow as they achieved their target of qualification for the 2021-2022 UEFA Champions League.
On the final day of the Russian Premier League season, Spartak Moscow and Akhmat Grozny played out a thrilling 2-2 draw, with the former Nigeria international netting the crucial equaliser eight minutes from time after Quincy Promes had reduced the deficit.
Moses' goal helped the Red and Whites finish second in the table and earned them the right to feature in the third qualifying round of the Champions League.
Spartak fans recognized Moses for his efforts by voting him the club's Player of the Month for May - the last month of the season.
Upon receiving the award from a selected fan, Ramil Khusyanov, Moses told Spartak Moscow's official YouTube channel : "Thank you! I really appreciate this. I'll do my very best to help the team, most importantly try to achieve more things this season than we did last year.

"The most important thing is to enjoy football and I'll definitely do that this year and help the team to win the league."
He added : "I scored the last goal May, it was the last game of the season. I was very pleased obviously to score the goal but the most important thing is the hard work the team put together, and I thought we did very well, two goals down and came back.

"Quincy with the goal in the second half and me scoring the last goal to make it 2-2 as well to give us the qualification for the Champions League which was very good for us."
In the coming days, Chelsea will confirm that they have ended their nine-year association with the 2013 Africa Cup of Nations winner, who has already resumed training with the Muscovites ahead of the new season.
Ifeanyi Emmanuel
Photo Credit : spartak.com
Copyright ANS