...the complete Nigerian football portal
Subscribe
'I'm the first and last player to do it' - Ex-Everton striker on substituting himself into match vs Spurs
Published: June 21, 2021 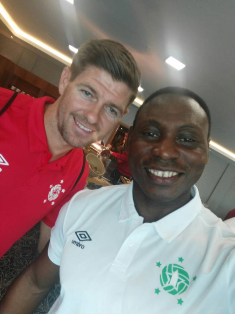 Former Everton star and retired Nigeria international Daniel Amokachi has claimed that he is the only player in history to substitute himself into a competitive match.
During the semifinal clash of the FA Cup match between Everton and Tottenham Hostpur on April 9, 1995, Amokachi entered the pitch as a substitute, replacing the injured Paul Rideout, without the approval of manager Joe Royle.
The gamble paid off as the legendary Super Eagles striker went on to score an eight-minute brace which helped knock-out Tottenham Hotspur from the competition.
To this day, it remains one of the most iconic moments in the history of the FA Cup.
Th 1996 Atlanta Olympics gold medalist was in the Toffees side that beat Manchester United 1-0 to clinch the FA Cup the following month.
"Growing up the only game we watched live is the FA Cup because we are glued in front of our television and whenever it's the FA Cup it's something huge for  Nigerians and for me to be at Wembley, given a medal around my neck it was something," Amokachi told Channels TV's The Chat.
He added : "The beautiful thing about it, the way it even happened, it was ordained for me to win the FA Cup because in the semifinal game against Tottenham Hotspur I substituted myself in. I'm the first player to ever do it and the last player to ever do it.
"I was sitting on the bench, we were leading 2-1, a player was injured, the doctor told the coach to change him and he said give him five more minutes.

"I continued warming up then I looked again he went down, and I walked to the third coach".
Asked if he was being disrespectful to manager Royle, Amokachi said : "It's football and what you believe in".
Everton broke their transfer record when they signed Amokachi from Club Brugge for a fee of £3 million in 1994.
Ifeanyi Emmanuel
Copyright ANS