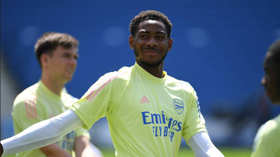 Through their official website, English Premier League side Arsenal have announced that three of their players have left the club for greener pastures.
The 20-year-old striker Trae Coyle has joined Swiss Super League side FC Lausanne–Sport in a permanent move, and departs after twelve years at the north London club.
Trae spent the first half of last season on loan at League One side Gillingham, scoring two goals in thirteen matches.
Another 20-year-old player in Zech Medley has joined Belgian side KV Oostende on a permanent deal, ending his five-year association with the Gunners in the process.
Medley made his Arsenal debut in a Europa League fixture against Vorskla Poltava, before additional substitute appearances against Qarabag and Blackpool in the FA Cup.
Republic of Ireland youth-teamer Mark McGuinness is the third 20-year-old moving on to pastures new.
The defender has agreed a transfer to Championship outfit Cardiff City for the forthcoming season.
Igho Kingsley
Photo Credit : arsenal.com