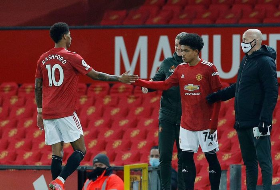 Manchester United's Academy player performance manager Les Parry has revealed that twenty clubs are interested in signing one of the academy players on loan for the 2021-2022 season.
Though the identity of the in-demand player has not been disclosed, the likes of Dillon Hoogewerf and Shola Shoretire, who trained with the first team in the second half of last season, are candidates having impressed for United's academy teams in 2020-2021.
While Shoretire picked up the coveted Jimmy Murphy Young Player of the Year award, Dutch-Nigerian Hoogewerf reached double figures for goals and assists for the U18s.
The England youth international is expected to train with the first team in pre-season to make up the numbers with several Manchester United players due to report late as a result of their participation at the ongoing European Championship.
"We have players, for instance, that the manager has not yet made a decision on whether they can go out or not," Parry told United's official website.
"They will go on the pre-season and we’ve got five or six; well, in the case of one player, 20-odd clubs are interested in him.

"They’ll be holding on and holding on but the manager will make the decisions after the pre-season. Others can also come up on the blind side.
"There might be players who go with the first team and the manager is thinking, at this point in time, they can go on loan but, suddenly, he sees them at close hand, and it might be one back from a loan, and think alright, I’ll keep hold of him for six months and have a closer look. "
Signed from Ajax Amsterdam in 2019, Hoogewerf inked his first professional contract in March 2020 while Shoretire went pro four months ago.
Igho Kingsley
Photo Credit : manutd.com