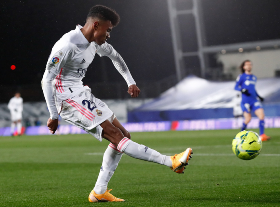 According to famous Italian journalist Gianluca Di Marzio via Mundo Deportivo, Serie A club Torino are interested in signing Spanish-Korean-Nigerian winger Marvin Akinlabi in the summer transfer window.
Real Madrid are open to loaning out the talented 20-year-old as it would be a great opportunity for him to continue his development in one of the top five European Leagues.

Akinlabi was handed his Real Madrid debut by former head coach Zinedine Zidane last season after impressing for the U19s, with whom he won the UEFA Youth League.

He totaled four appearances for Real Madrid in La Liga in 2020-2021 and was on the bench when they were held to a goalless draw by Liverpool in the Champions League back in April.