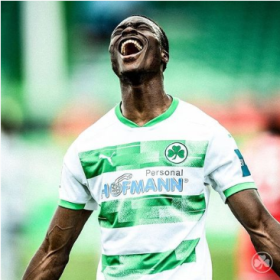 SpVgg Greuther Fürth have handed Super Eagles hopeful Dickson Abiama a new contract, informs the newly-promoted German Bundesliga club.
Abiama has signed a three-year contract that will keep him at the Cloverleaves until the end of the 2023-2024 season.
The 22-year-old's progress has been very rapid as only a year ago he was playing for SC Eltersdorf in the fifth tier of German football.
Last season, he netted seven goals while providing two assists in 29 matches, three of which he started, making him one of the most efficient substitutes in the 2. Bundesliga.
His 83rd minute strike versus Fortuna Düsseldorf proved to be the winning goal that secured Greuther Fürth automatic promotion to the Bundesliga.
"I am delighted that those responsible have placed their trust in me and am grateful that I can extend my contract in Fürth," Abiama said to the official website of Greuther Fürth.
"Last year was just amazing and I want to help ensure that we give our fans as much joy as possible in the coming season".

Abiama came to Nuremberg from Nigeria at the age of sixteen, he scored 27 goals in 25 matches in his first season at
SpVgg Mögeldorf 2000.
Igho Kingsley
Photo Credit : sgf1903.de